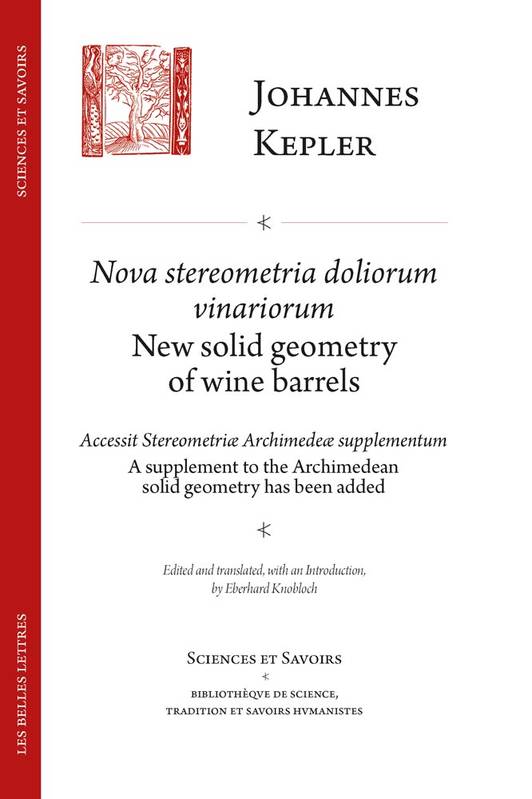 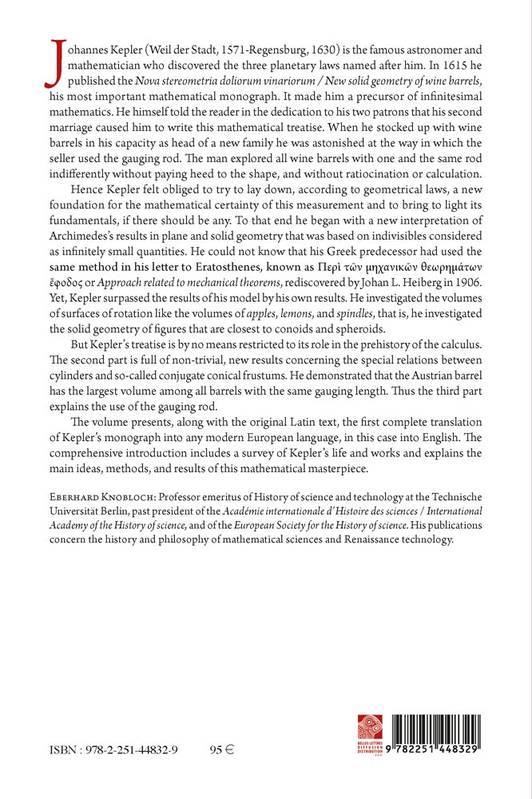 Johannes Kepler (Weil der Stadt, 1571-Regensburg, 1630) is the famous astronomer and mathematician who discovered the three planetary laws named after him. In 1615 he published the Nova stereometria doliorum vinariorum // New solid geometry of wine barrels, his most important mathematical monograph. It made him a precursor of infinitesimal mathematics. He himself told the reader in the dedication to his two patrons that his second marriage caused him to write this mathematical treatise. When he stocked up with wine barrels in his capacity as head of a new family he was astonished at the way in which the seller used the gauging rod. The man explored all wine barrels with one and the same rod indifferently without paying heed to the shape, and without ratiocination or calculation.

Hence Kepler felt obliged to try to lay down, according to geometrical laws, a new foundation for the mathematical certainty of this measurement and to bring to light its fundamentals, if there should be any. To that end he began with a new interpretation of Archimedes’s results in plane and solid geometry that was based on indivisibles considered as infinitely small quantities. He could not know that his Greek predecessor had used the same method in his letter to Eratosthenes, known as Περὶ τῶν μηχανικῶν θεωρημάτων ἔφοδοϛ or Approach related to mechanical theorems, rediscovered by Johan L. Heiberg in 1906. Yet, Kepler surpassed the results of his model by his own results. He investigated the volumes of surfaces of rotation like the volumes of apples, lemons, and spindles, that is, he investigated the solid geometry of figures that are closest to conoids and spheroids.

But Kepler’s treatise is by no means restricted to its role in the prehistory of the calculus. The second part is full of non-trivial, new results concerning the special relations between cylinders and so-called conjugate conical frustums. He demonstrated that the Austrian barrel has the largest volume among all barrels with the same gauging length. Thus the third part explains the use of the gauging rod.

The volume presents, along with the original Latin text, the first complete translation of Kepler’s monograph into any modern European language, in this case into English. The comprehensive introduction includes a survey of Kepler’s life and works and explains the main ideas, methods, and results of this mathematical masterpiece.
S'identifier pour envoyer des commentaires.